I am a retired digital arts teacher and former entrepreneur.  Four years into “retirement,” I rediscovered ceramics, and it lit my soul.

When I was a 14-year-old high school student, ceramics were my refuge. I would hide in the ceramics studio with my friend Melody and throw pot after pot. I realized then, as I do now, that ceramics had therapeutic powers over me.

Last year, when I was 64, I took my first ceramics class since high school at our local community college and threw, fired, and glazed the above featured pot. The teacher remarked, “Why, you are not a beginner!” It was the first pot I had thrown in 50 years. I had no idea the muscle memory of throwing pots would return, but it bolstered my confidence to get that feedback.

A few months later, last summer, I took a class at Anderson Ranch Arts Center. It required that you were at a Level 2, which meant you were familiar with all forms of ceramics and ceramics terminology. It was a stretch. I was certainly not. However, I was intrigued by the topic—Digitally Fabricated Molds taught by Del Harrow—so I pushed the truth and said I was Level 2 on the application. 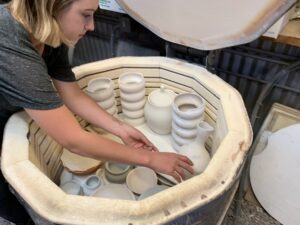 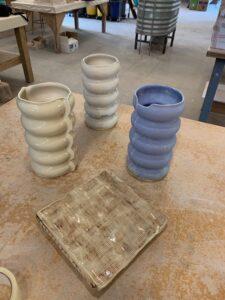 Some of the work I produced in Del Harrow’s class.

In this class, I learned enough Rhino3D software to make a form, make plaster molds, utilize a CNC milling machine to create the mold from the Rhino file, CNC foam and make a slip cast mold, and finally, do the porcelain slip casting. If a lot of that is greek to you, it was to me, too! But I felt alive—alive like I hadn’t felt in years. 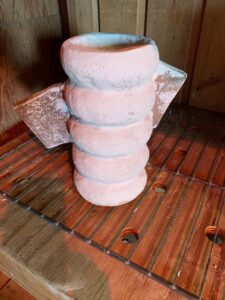 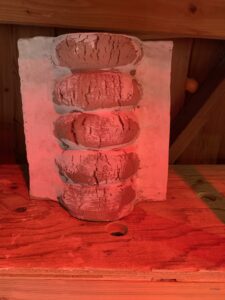 I made some pieces in the class, and couldn’t wait to learn more. I took another class at Anderson, taught by the legendary ceramic artist, Matt Wedel. In this class, I re-used my molds from the class before, and used hand-building techniques such as coil and press molding. 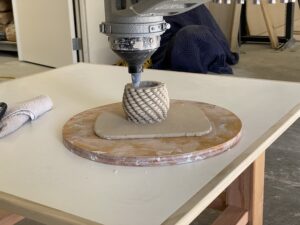 I met a high-school teacher in one of the classes who was using the 3D Potterbot. It looks and operates much like other 3D printers, only it uses clay instead of plastic. Luckily, our local community clay studio secured a Scara model, and I’ve now added 3D printing to my ceramics learning journey.

When I stood in front of Del Harrow and Matt Wedel’s classes at Anderson Arts Ranch to show my air quotes “portfolio,” I felt ashamed of my lack of ceramic skills and artwork. As I showed the image of the first pot at the beginning of this post to the class of far more accomplished potters, my eyes welled with tears, and my voice shook. I was no longer the person who had created a company, or taught computer graphics, or had earned awards or accolades. I was completely naked in my lack of knowledge. An abject beginner. I felt as if I was an imposter, and it was terrifying.

I only share this because I know that I am not alone in my fear of learning something new or committing to a new art practice. We are most often our own worst critics and overcoming that barrier has been a big part of my learning curve.

Nowadays, I spend my days and nights pouring through Instagram images and YouTube videos. I am obsessed with getting better and becoming the artist that I know is trapped inside me. I push myself to express and create regardless of success or failure.  Now,  in the midst of the global corona virus crisis, I hope to use this extra time at home to share my discoveries and lessons with a broader audience.

Thanks for your ear, and I would love if you will join me here.

CV:19 and Clay Printing at Home

Very interesting, Lynda, I will keep reading your posts. I have a 94-year old friend who is an artist and who has been doing porcelain ware ever since she retired from teaching in NYC.. Her claim to fame is the sale of a bowl to President Clinton. Love Marian

Very cool. I love and miss you Marian! Nice to see you in the blog feed.

Truly Inspiring. I’m happy than you find the form of art being stimulating for you and you could express your artistic and creative self through it!
I’m feeling lots since moving to SB not necessarily in a negative way.
Life has always been to how to make it the best for the family and kids. But now more time asking what I truly passionate about and stimulating. Sadly or maybe sadly I don’t know yet.
Love the job I had in China which was being a journalist.
Your article definitely makes me think and wondering!
Thanks for sharing and much love to you!

It’s painful to be in that space of not knowing your passion. I have been there many times. Then you find it, and you know it’s “the one” and you go go go, and it’s effortless and joyful! I know you will find it Bridget. So happy you moved to SB, and I hope we spend a lot of time together in the real world once we are back in the swing. Thanks for all your nice thoughts!